Have I already mentioned the concept that stream of conciousness is where voluntary and involuntary memory meet. If I have, please forgive me, but I can’t get that theme out of my mind (is that voluntary or involuntary?).

How much choice do we have regarding what we think, what leaps into our minds, what images appear at the most unexpected times? It seems we have very little voluntary control over the process. Our only real choice is what we do with the memories that arise. Can we decide to give authority to some memories, and allow others to matter less or distract us less.

I went to the see the wonderful new movie called “The Way,” directed by Emilio Estevez with the main character played by his father Martin Sheen. Martin (called Tom in the movie) has gone to St. Jean Pied du Port, a small town on the French-Spanish border, to collect the ashes of his son who had an accident and died while walking the pilgrimage known as the Camino de Santiago. Moved by an epiphany of his own, Tom decides to carry his son’s ashes and finish the journey his son began.

I walked the first part of the very same Camino two years ago, as a memeber of a documentary film crew. Director Lydia Smith is producing an amazing film, nonfiction of course, following six men and women who are walking the actual 500-mile path. I hope that this uplifting film will be out next year, and available in theaters and on your own PBS station. But in the meantime, I recommend checking out “The Way.” You can follow the progress of the documentary “The Camino Documentary” by clicking on this link. You can also check out the Personal Pilgrimage page on my website.

Of course I expected to watch the movie with warm, nostalgic memories of my experience. I proudly pointed my finger and whispered to my husband: I was on that road…I met a wonderful innkeeper in that albergue, etc. But the memories that chose to surface first were about how hard it was for  me to keep up with the film crew, most of whom were younger and stronger than I was. I remembered how I went outside of the hostel in Pamplona, and cried my heart out as I watched the rain come down, how I felt so displaced and out of my comfort zone, how I carried way too much in my pack, how often I was starving and survived with chocolate bars and wads of French bread, how lonely I sometimes felt, far from home and family.

Don’t get me wrong. I will rave about the Camino and the way it transformed me. I had been through some very challenging situations in the previous year, and once the crisis had passed, I didn’t know how to let down my armor. Walking up the road that crossed the Pynrenees mountains, sweat pouring down my face, other members of the crew getting ahead of me, the fog rolling in…something I had been holding onto broke loose. I called to the film crew to wait for me. The DP (director of photography) walked down the road and fell into step with me. “We will never leave you behind,” he said.

When we all got to the top, I took off my pack and sat on grass next to my friend Theresa, the producer and co-director. Together we wept again, she feeling the emptiness of being away from her children for the first time, I missing a part of myself. With total abandon, we cried til we laughed, until everyone with us started laughing too. Here is a picture someone took of that moment–a memory image frozen in time, though the way I experience may continue to change. (I’m on the left.) 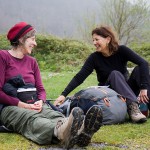 The fog cleared and even if I still had too much weight in my pack, my heart felt lighter and when I got up, the world had shifted and my burdens were gone. That’s my favorite memory; it’s voluntary, but sometimes it comes up unexpectedly and renews my faith in the balance and kindness of  life.

What are your memories? Do they make you think of things you would rather forget or do they bring you back to the complex and multi-dimensional tapestry of your life with its challenges and gifts? Probably both. Tell us your observations.

From Essay to Blog Gratitude Of Course